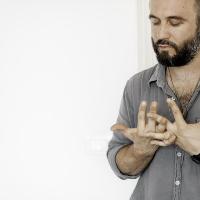 This event has already happened!
This event occurred in October 2016. If you're looking for a upcoming event, try the links below:
View more events.
Tweet

For over a decade Miles Cooper Seaton’s work has defied genre and discipline, spanning immersive ambient installations, intimate sets in sacred spaces and festival stages from Los Angeles to Tokyo – as a solo artist, with his own band Akron/Family and as a member of Michael Gira’s Angels of Light. Their common thread is the raw emotional charge that infuses every performance with incendiary energy, leaving listeners hyper-sensitised to their own feelings and bodies, to each other and to the world around them.

Oliver Coates is a cellist, composer and producer based in London. In the past year he has performed solo shows in China, Russia, Brazil, Egypt and Australia, and made his New York debut at Le Poisson Rouge. He was the winner of the Royal Philharmonic Society Young Artist Award 2011 and is an Artist in Residence at the Southbank Centre. He has released records on Prah Recordings and Slip, and collaborates with the London Contemporary Orchestra, Jonny Greenwood (on The Master and There Will Be Blood), Mica Levi (on Under the Skin) and the visual artist Lawrence Lek (on the award-winning video piece Unreal Estate). With Lek, he presented the world premiere of a new work, QE3, at this year's Glasgow International festival, and he programmed the Southbank Centre’s DEEP∞MINIMALISM festival this summer. His solo LP, Upstepping, was recently released on Prah, and he will release a collaborative record with Mica Levi, Remain Calm, on Slip in late 2016

'Imagine one of those classic stoner rock crews – Sleep, perhaps, or Om – hunkering down in the Black Ark to cut some sides for Hyperdub with an Apollo-era Eno casting a quizzical eye over proceedings.’ -

Black Spring are an emerging MK/Derby trio creating heavily repetitive music from a palette of processed tapes, guitar, voices, drums, synth & homemade instruments. Their latest release - a limited physical edition split with Miles Cooper Seaton - on their own Monocreo label will be available at the show.